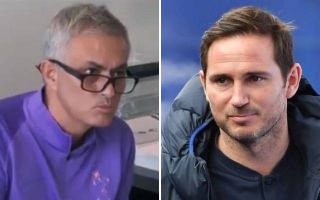 Chelsea’s starting eleven to face Burnley has been announced – and these Blues fans on Twitter are bemused at the exclusion of Timo Werner.

The Blues visit Turf Moor today to face winless Burnley, who sit 18th in the table going into the fixture. Chelsea can close the gap on the top of the table with a win, having drawn their previous two Premier League games.

Frank Lampard looks to have opted to go with a 4-3-3 formation today, with Christian Pulisic and Hakim Ziyech on the wings, and Mason Mount, N’Golo Kante and Kai Havertz in midfield.

However, upfront there’s no Timo Werner in sight, he only makes the bench, with Tammy Abraham leading the line.

It makes sense, with Werner being a player who likes to play off the shoulder of the last defender and Burnley sitting deeper than any other team in the league, but that hasn’t stopped Chelsea fans taking to Twitter to question the decision.

Here’s how some of the Blues faithful reacted to the team news.

Was literally perfect till I saw Werner on the bench ????

Good line up but why is Werner on the bench??

This could’ve been a perfect lineup if Lampard started Werner.

Werner on the bench pic.twitter.com/Kp7D3CGlTr