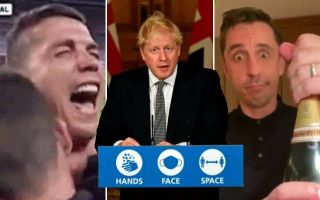 Premier League fans have reacted in their masses to news that football will not be suspended as England enters a four-week lockdown.

As reported by the BBC, England will be locked-down until December 2nd, with businesses classed as non-essential being forced to close their doors and Britons being encouraged to remain at home where possible.

However, as mentioned in the same report from the BBC, ‘elite’ sport will not face suspension, meaning the Premier League will be allowed to continue as normal through the lockdown period.

This is great news for any Premier League fan, who dearly missed the game when we had to go without when the pandemic first reached these shores.

BBC journalist Simon Stone posted the news on Twitter in wake of it’s announcement, and it’s safe to say that some of the fans who replied were absolutely delighted with it.

Here’s how some fans on Twitter reacted to hearing the Premier League will continue.