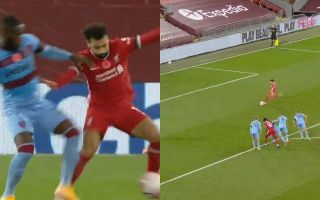 Mohammed Salah has drawn Liverpool level with West Ham at Anfield from the penalty spot.

West Ham had taken the lead over the Premier League champions through an early opener from Pablo Fornals. It looked as though the Hammers could be set to continue their good run of form, which has spanned over tussles with Wolves, Leicester City and Manchester City – clubs of real calibre.

Liverpool was always going to be the biggest test they have faced so far, and frontman Mohammed Salah in particular. The Egyptian drew contact from defender Arthur Musuaku, the referee pointed to the penalty spot, and Salah made no mistake from 12-yards.

As is often the case in games against teams of Liverpool’s standard, you take your eye off the ball for one moment and you’re punished. David Moyes will be gutted to have given up a goal so cheaply. He would have known Salah would score even before his foot touched the ball, such is his consistency from the spot.