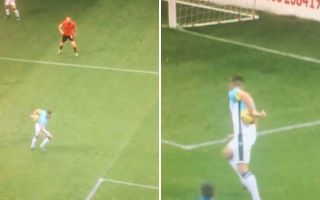 Ross County conceded one of the most bizarre penalties you’re ever likely to see during their clash with Dundee United this afternoon.

You can tell it’s Halloween, because there’s been some really horrifying penalties on display today. First we had Bristol City’s Nahki Wells faltering from the spot with a truly terrible Panenka attempt, now Ross County’s Iain Vigurs has had a nightmare.

Vigurs was not given the opportunity to step up to take a penalty for the Scottish outfit, rather he conceded one, and in the kind of fashion that you don’t see everyday. He lost sight of the bouncing ball, and the next time he knew of it’s whereabouts, it was sandwiched between his hand and his back.

Dundee despatched from the spot, which will make matters worse for Vigurs. We’re not entirely sure if there’s a Match of the Day equivalent for Scottish football, but if there is, you can be certain that he won’t be tuning in to watch it.