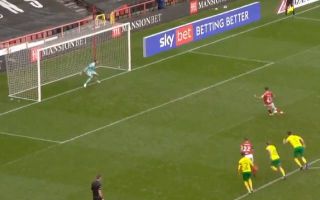 Panenka penalties are superb if you get the execution right – but leave you with egg on your face if you get it wrong, as Bristol City’s Nahki Wells discovered this afternoon.

Panenkas have become a frequently used penalty technique in recent years. Waiting for the goalkeeper to dive either side and gently dinking the ball down the middle always gets an extra cheer from the crowd.

Nahki Wells of Bristol City will be thankful there was nobody in the stadium to witness his dreadful panenka attempt against Norwich City this afternoon.

It was a Halloween nightmare for the Bermudan, with Tim Krul diving to one side, but his effort clearing the crossbar. It was an absolute shocker.

It cost Bristol City in the end, stunting any hopes of a revival as they fell to a 3-1 defeat to Norwich at home. Wells will have some explaining to do in the dressing room after this.

Hopefully his teammates will see the funny side…