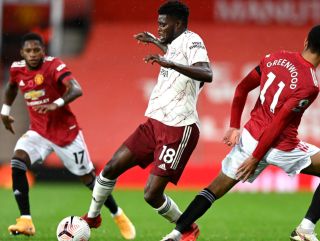 There was a lot of talk about Thomas Partey or Houssem Aouar at Arsenal this summer, but in the end they decided to plump for the former Atletico Madrid midfielder on deadline day.

It looked like Aouar may be better as pure playmaker, but Partey is starting to show that he’s the complete midfielder.

The attention will always be on Paul Pogba and Bruno Fernandes when Man United are playing, but it was the Ghanaian who stood out as the dominant midfielder in the game today.

He was mainly used in the defensive phase to keep things tight and win the ball back, but the stats show that he was actually outstanding in every single phase of the game:

What a player he is. ??? pic.twitter.com/UUqcMMgpgC

This is particularly encouraging for Arsenal because Mikel Arteta has shown that he will change his tactics up depending on the opposition, so if he can trust Partey to anchor everything together in the midfield then that’s a wonderful thing.