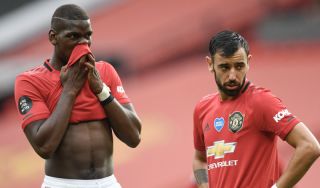 Manchester United midfielder Bruno Fernandes has spoken openly about his relationship with superstar and team-mate Paul Pogba, assuring fans that the pair get on well despite suggestions there may be friction between the midfielders.

Fernandes, 26, joined United in January earlier this year from Sporting Lisbon in a move which cost the Reds’ hierarchy £49.5m, as per Transfermarkt.

The Portuguese midfielder has enjoyed a superb opening 11-months after already directly contributing to 28 goals in 30 matches in all competitions.

However, despite the instant impact Fernandes has had, there has been some recent suggestions that Ole Gunnar Solskjaer faces a selection headache because the midfielder may not be able to play with Pogba.

Sky Sports’ pundit Jamie Carragher believes that the pair struggle when played together, he said: “You’ve said to me when we’ve debated this, about David Silva and Kevin De Bruyne, not ever expecting them to be able to do what they did [in terms of improving their tactical discipline].

“What you’re taking about in terms of Pogba to the left and Fernandes to the right, you’ve still got to have discipline in those roles. Silva and De Bruyne had that.

“When Nemanja Matic gets the ball, let’s say it’s Fernandinho, he doesn’t have to look up and he knows De Bruyne would be there, Silva would be there.

“Those players had great discipline within that shape. The players you’re talking about don’t have that. If Matic or Fred is in that position, Fernandes could be on the wing, Pogba could be at centre forward.”

However, speaking ahead of today’s important Premier League match-up against domestic rivals Arsenal, Fernandes has squashed suggestions that the pair may not work well together.

Speaking to Sky Sports, Fernandes said: “We have a good relationship, of course.

“I have a good relationship with him on and off the pitch.

“He’s a funny guy, he always wants to joke. I know him from Italy already but now I have the chance to be in a team with a World Cup winner.

Fernandes and Pogba are currently preparing to host Arsenal at Old Trafford with both players in line to be named in Solskjaer’s starting eleven.

This afternoon’s important match-up is scheduled to kick-off at 4.30pm UK time.