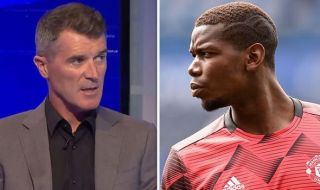 Manchester United legend Roy Keane has given a brutal assessment of Paul Pogba’s character as he explains why he thinks he’s not getting into Ole Gunnar Solskjaer’s starting XI every week at the moment.

The France international has certainly had a difficult time at Old Trafford since his move back from Juventus in 2016, but he’s at least normally been able to command a place in the starting line up on a regular basis.

MORE: Manchester United ace fears January transfer window move to PL side may be under threat

Now, Pogba faces increased competition in that area after the signings of Bruno Fernandes in January and Donny van de Beek in the summer, with the former certainly making a tremendous impact so far.

Keane is well aware of Pogba’s talents, but does not believe the 27-year-old is showing enough of the right characteristics mentally to earn the club’s trust.

Speaking about Pogba on Sky Sports, as quoted by the Manchester Evening News, former Man Utd captain Keane said: “Pogba’s performances over the last few years for United haven’t been good enough. It’s as simple as that.

“I know you make a point, Jamie (Redknapp), about players having energy and there’s an obsession at the moment with protecting the back four, but what United lack at the moment is a bit of creativity going forward.

“Fernandes has been brilliant, Van de Beek hasn’t had a look in yet, I’d like to see him in there. Why not? I’ve seen McTominay in there, Fred, Matic – they’ve all had a go – but for me, they’ve not done enough.

“The amount of arguments I had when I played in midfield, with centre-halves, everyone’s obsessed with protecting your back four. United need a bit more than that, you speak about energy, you need more than energy to play in midfield for Man United, you need some creativity, you need to be a lad with a bit of character, with a bit of heart and Pogba hasn’t done enough.

“I think of what Bill Shankly said years ago, with players, sometimes they turn up and you don’t know what you’re going to get. Pogba is like that, that is no good for you if you want to win titles. For all Pogba’s talent, he should be in this team, but he doesn’t do enough – he doesn’t do the other side of the game. He doesn’t show enough spirit, enough fight, he’s got talent, but that’s not enough to play in midfield for Man United.

“When you’re a player at a football club like Man United, a big club, your job as a footballer, day-in, day-out, come Thursday and Friday when the manager is sitting with his staff over a cup of tea at the training ground… who’s our starting XI? The manager will go, ‘he’s definitely in my team’ – that was my attitude when I played for Man United.

“Pogba should be in this team, but when the staff are sitting down, they obviously don’t trust him enough to go out and do a job for Man United.”

This is typically brutally honest from Keane, who certainly knows what it takes to be a real leader for United after a great playing career with the club.