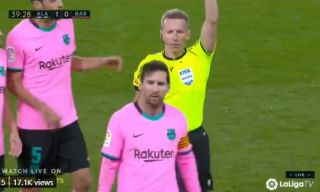 Barcelona superstar Lionel Messi does not look like he’s particularly enjoying himself at the moment.

It’s been a difficult few months for the Argentine and for his club, with yesterday proving another frustrating result as Barca drew 1-1 with Alaves.

Messi narrowly misses the referee as he kicks the ball away! ?

Safe to say he's not too pleased with this first half ? pic.twitter.com/pXX9xq9xi3

Messi picked up a yellow card for this, and it’s hardly the worst crime in the world, but we’re not used to seeing this immensely gifted player like this.

Barcelona urgently need to sort themselves out or they’re going to continue to fail to get the best out of an elite talent.