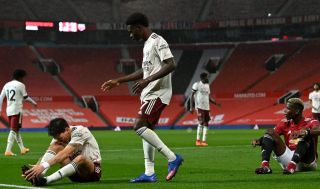 It’s been a strange season for Man United so far, because they only seem capable of playing amazingly well or shockingly awful, so any bad result tends to feel like a disaster.

Ole Gunnar Solskjaer will take his share of the blame for his team selections and substitutions, but his reaction to Paul Pogba’s penalty was strange to see.

Pogba himself admitted that the tackle was stupid so Solskjaer had the opening to criticise his player and demand better, but he doesn’t seem overly fussed:

There’s a lot of social media reaction from the fans who seem to be fed up with Pogba and his lack of consistency on the pitch, so this might not go down well with a few of them.

It looks like the main problem is Solskjaer has absolutely no idea what to do with Pogba or how to set his team up to get all of his best players on the field, so perhaps he feels guilty for shoving Pogba on the left wing in the second half today.