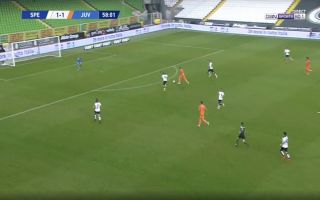 Cristiano Ronaldo has scored just over a minute after coming on for Juventus in this afternoon’s tie against Spezia, marking the forward’s return after a spell on the sidelines due to Covid-19.

Ronaldo came on in the 56th minute for Paulo Dybala and it took the 35-year-old just two minutes to hit the back of the net on his return.

After some quality build-up play from Andrea Pirlo’s side, Alvaro Morata slipped Ronaldo in.

The Portuguese forward surged past a defender before rounding the goalkeeper and slotting the ball into the back of the net.

Ronaldo has been unable to play for almost a month now, with the attacker first testing positive for Covid-19 during the October international break and now recovering.

This is Ronaldo’s fourth goal so far this season in Serie A, with the superstar bagging as much from just three appearances.