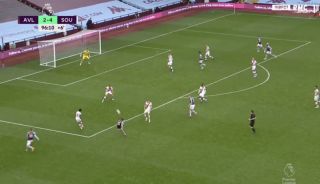 Despite a late flurry from Dean Smith’s Aston Villa, the Villains were unable to pull off a shock comeback after previously trailing 4-0 to Southampton in today’s early Premier League kick-off.

First-half goals from Jannik Vestergaard and a 12-minute free-kick double from James Ward-Prowse appeared to set the Saints well on their way to claiming all three-points.

The second-half brought a stunning Danny Ings effort which piled the misery on Smith’s side, however, a late comeback with goals from Tyrone Mings and Ollie Watkins set-up an exciting finish.

Villa came so close to completing a brilliant comeback, but it wasn’t to be with captain Jack Grealish bagging Villa’s third in the 97th-minute which turned out to be nothing more than a consolation as the game ended 4-3 to Southampton.