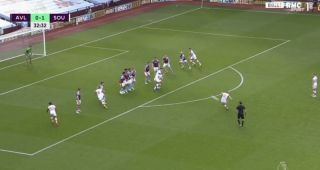 Southampton have headed into the break in today’s early Premier League kick-off against Aston Villa 3-0 up after enjoying a simply fantastic 45-minutes which have included two stunning free-kicks from Saints captain, James Ward-Prowse.

Ward-Prowse, 26, has been the stand-out performer in this afternoon’s match which saw his side arrive at Villa Park as the game’s underdogs.

However, Saints’ dead-ball specialist has produced the goods on not just one occasion, but two.

The English midfielder popped up and channeled his inner Morten Gamst Pedersen as he smashed home two free-kicks in the space of just 12-minutes to put his South Coast side out of reach.