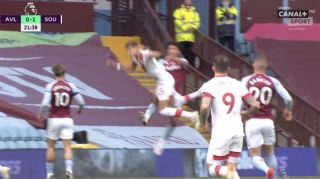 Southampton’s Jan Bednarek is very lucky not to have suffered a neck injury after the defender collided mid-air with Aston Villa’s Ollie Watkins during today’s early Premier League kick-off.

READ MORE: Hakim Ziyech is loving life in London and admits he feels at home playing with Chelsea

However, the game came so close to be hampered for all the wrong reasons after Bednarek collided mid-way with striker Watkins which resulted in the Polish defender landed heavily right on top of his neck.

The defender was able to carry on after receiving treatment though, thankfully.