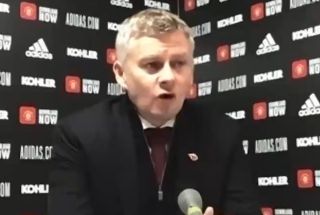 It was always going to be interesting to see how much football would change without supporters in the stadium, and it does seem like home advantage isn’t as big as it used to be.

That would make sense as fans should drive their own team on and intimidate the opposition, but it looks like Man United are struggling more than most.

They lost again against Arsenal today with a performance that can best be described as flat, and it looks like the manager thinks the lack of supporters is a major reason for their struggles:

Solskjær thinks the lack of fans is to blame for United’s home struggles #MUNARS pic.twitter.com/yYb6ERsqDR