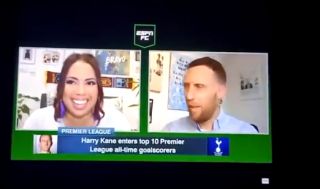 ESPN have been caught out as footage of their presenters and pundits mocking Tottenham striker Harry Kane have emerged online.

See below as they discuss how boring Kane is and how they hate hearing him speak due to his strange voice, which is a clearly insensitive mocking of Kane’s speech impediment…

This is unacceptable behaviour and one hopes ESPN will take the appropriate action if this footage shows what it quite clearly appears to show.

“I hate hearing him speak. He’s got a weird voice,” says an unseen producer.

Mark Ogden then jokes: “Shall I do it in the style of Harry Kane?”

“Our best creative player” – Wright urges Arteta to use this Arsenal player more, and it’s not Ozil

The unseen presenter adds: “That’s what stands out about him.”

Alexis Nunes concludes: “Yeah, his voice. Literally. For someone who speaks like that, thank God he plays football.”

It’s hard to see how that could have been taken out of context, and it’s really not nice to see.