Former Premier League referee Mark Halsey has admitted the decision regarding whether Arsenal defender Gabriel should’ve been sent off against Manchester United was a ‘subjective’ one.

The moment of controversy came in the 73rd minute as Gabriel hacked down Mason Greenwood after being beat by a wonderful bit of skill from the wonderkid.

The centre-back was already on a yellow card at the time, having picked one up in the 27th minute for stopping Marcus Rashford in his tracks on a potential break.

Halsey, who managed in the Premier League for over 14 years, added that referee Mike Dean actually handled the situation ‘very well’, despite constantly facing seemingly unfair criticism for his calls. 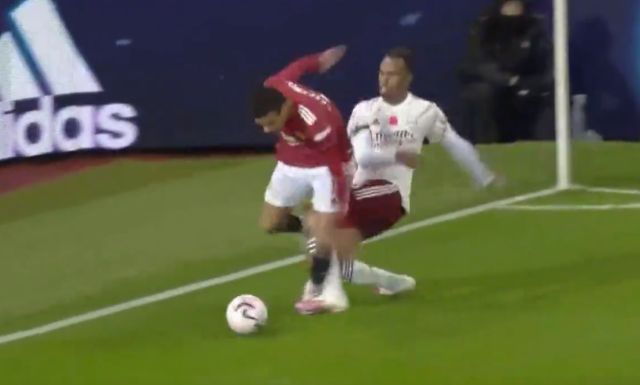 A closer look at Gabriel’s controversial challenge on Mason Greenwood.

Here’s what Halsey had to say on the controversial call:

“I think the second one, not that we want to see cheap yellow cards in the Premier League, it is subjective, it’s one of those that on another day, another referee would’ve issued a second yellow card.”

“I wouldn’t criticise Mike Dean, who comes in for a lot of criticism for handing out yellow and red cards quite frequently, but on this occasion I think it’s subjective.”

“I thought Mike took the managed approached to it, warned Gabriel that one more and he’d be on his way.”

“When you referee top games in the Premier League, it’s about managing the game, the occasion and the players and I thought he handled that situation very well.”

Yesterday’s encounter between the rivals was much scrappier than many would’ve expected, with 12 fouls a piece from each side as Mikel Arteta’s men especially showed more grit than usual.

Halsey is spot on by suggesting that it was the kind of challenge that could’ve ended with Gabriel being sent off on another day, but maintained that this kind of incident is purely ‘subjective’.

Halsey can be found reviewing decisions every weekend here.