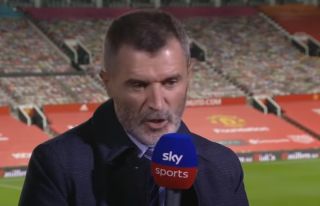 Manchester United legend Roy Keane has hit out at the body language of Marcus Rashford during yesterday’s 1-0 defeat at home to Arsenal.

Despite some strong performances away from home and a good start in the Champions League, Man Utd have had an absolute nightmare in Premier League home games so far this term, failing to win any of their opening four matches at Old Trafford, their worst run since 1972/73.

MORE: Video: Tim Cahill takes advantage of distanced punditry as he picks a fight with Roy Keane over Man United vs Arsenal analysis

Rashford has been a man in form and has also been praised for his recent off-the-field campaigning to end child hunger in the UK, but Keane was hugely unimpressed with the way he conducted himself against Arsenal.

Singling out Rashford, the former United captain said: “Looking at Rashford today … I know he’s still a young man, but his body language was shocking, really shocking. Shrugging his shoulders when things weren’t going his way. You pull your sleeves up at Man United. I don’t see any leaders out there.”

Keane doesn’t mince his words and it seems clear he was dismayed with what he saw from his old club as they lost at home to Arsenal in the Premier League for the first time in 14 years.