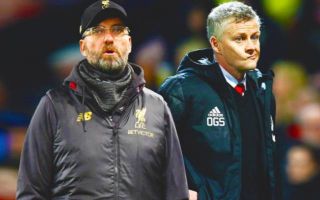 Ole Gunnar Solskjaer is under the microscope at Manchester United, but the stats show that he has outperformed Jurgen Klopp across his first 100 games in charge.

Solskjaer’s time at the helm reached a new low yesterday afternoon, with United falling to a 1-0 defeat to Arsenal at home, meaning they sit 15th and without a win at Old Trafford six games into the season.

Naturally, it raises questions over his long-term future at Man United. David Moyes, Louis Van Gaal and Jose Mourinho have all been axed for comparable struggles.

However, Football365 have compared the first 100 games in charge of Solskjaer at Man United and Jurgen Klopp at Liverpool – and the Norwegian surprisingly comes out on top.

Have a look at the figures, provided by Football365.

Klopp was given time by Liverpool to transform them into title challengers, delivering the Champions League and Premier League in back-to-back campaigns.

FSG could have been trigger-happy and dismissed the German, but they showed faith and are now reaping the rewards for doing so. It suggests that Man United ought to change their approach and get behind their manager.