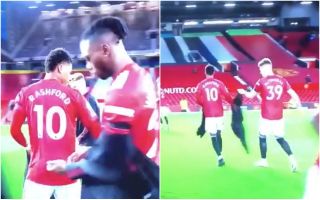 Marcus Rashford once again proved that he’s one of the classiest players around with a lovely gesture before Manchester United started their clash against rivals Arsenal on Sunday.

Just before kick-off as the players were taking off their coats, Rashford offered a helping hand to his teammates by collecting the jackets of Fred, Mason Greenwood, Scott McTominay and Bruno Fernandes.

This saved the Manchester United kitman from having to gather each item one by one, with Rashford’s moving allowing some of his teammates to take up their positions on the pitch early.

We’re not surprised at all that a team-first gesture like this came from Rashford, who has become a player that everyone loves for his unmatched commitment to charitable causes off the pitch.