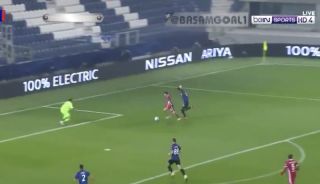 Liverpool’s new forward Diogo Jota has continued his impressive form in the early parts of his Liverpool career after the Portuguese maestro scored a cheeky dink over Atalanta’s keeper during tonight’s Champions League tie.

Faced one-one-one with Marco Sportiello, Liverpool’s forward who is taking the place of regular Roberto Firmino held his nerve as he chipped the ball delightfully over Atalanta’s number-one.

Liverpool lead 1-0 after just 16-minutes and as it stands currently sit top of Group D’s table on a maximum nine points from a possible nine.

Jota’s goal against Atalanta. What a player pic.twitter.com/dpCZt4xgBg

The Portuguese forward has scored in four consecutive games for Liverpool! pic.twitter.com/a2vKQbuorf