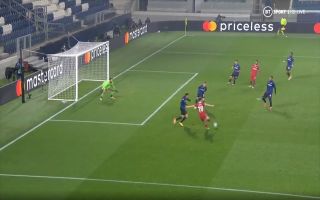 Diogo Jota continued his dangerous run of form by bagging his second of the night for Liverpool in the 33rd minute of the Champions League tie against Atalanta.

A stunning long-range pass from Joe Gomez – which will undoubtedly earn comparisons to injured teammate Virgil van Dijk – set up Jota in a dangerous position.

The Portuguese forward used a clever touch to bring the ball back inside before leaning in and drilling it into the bottom corner with a superb finish.

Jota fired the Reds into the lead in the 16th minute with another wonderful finish.

Jota is already turning out to be a wonderful recruit for the Reds, he seems to pop up with goals just when Jurgen Klopp’s side need them.