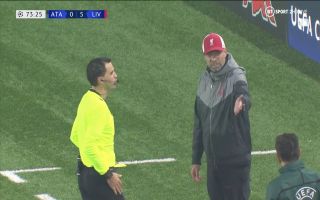 In the 73rd minute of tonight’s Champions League tie against Atalanta, Jurgen Klopp saw a yellow card after hilariously arguing with the referee over a penalty shout whilst the Reds were 5-0 up.

Klopp wasn’t happy after the Merseyside outfit missed out on a spot-kick after wing-back Johan Mojica knocked over Curtis Jones in the box in a challenge that hardly screamed out controversy.

Klopp protested the decision, with the referee then coming over to the Liverpool gaffer in a stoppage of play, with the pair exchanging words.

Klopp left it a little too late to come across as apologetic as the referee brandished a yellow card, whilst also confirming that VAR did in fact check the incident.

The German is relentless when it comes to every facet of his management, it’s truly remarkable.