Mauricio Pochettino and Raul have been mentioned as potential replacements for Zinedine Zidane as Real Madrid manager by the Daily Mail.

Club-legend Zidane is under pressure at the Santiago Bernabeu, despite only recently defeating Barcelona 3-1 in El Classico at the Nou Camp.

The Frenchman has managed to win Los Blancos just one point from their opening two Champions League fixtures, and he was fortunate to get even that.

As is often the case at a club like Real Madrid, a few negative results can lead to speculation surrounding your future mounting, as is the case here with Zidane.

As per the Daily Mail, tonight’s clash with Inter Milan could be crucial in determining his future, with the club already identifying two potential replacements.

The Daily Mail report that former Tottenham manager Mauricio Pochettino and legendary centre-forward Raul are both options to replace Zidane, should he be dismissed.

Pochettino has been out of work ever since he was sacked by Tottenham, with Raul not straying too far from his beloved club as he bids to launch a successful coaching career.

Both managers have polarising experience and profiles, so it’d be interesting to see which Florentino Perez would opt for if Zidane was handed his marching orders. 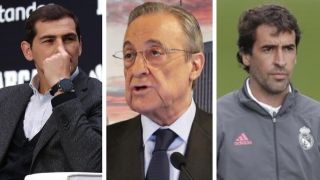