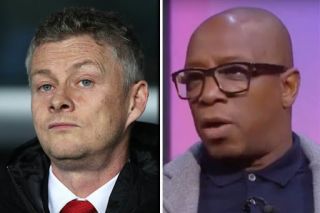 The Gunners great listed a number of things that have left him unimpressed with the Norwegian tactician, describing him as just managing off ‘vibes’ in comparison to the transformation seen at the Emirates Stadium under Mikel Arteta.

Arsenal won 1-0 away to Man Utd at the weekend, ending a long winless run at Old Trafford and a five-year wait for a win away to any of the big six sides in the Premier League.

Arteta looked to get his tactics spot on against United, and Wright did not hold back in his assessment of everything Solskjaer seems to be getting wrong.

Speaking on his podcast Wrighty’s House, as quoted by the Metro, he said: “Can I just say something, I’m just going to blast it in: If Arteta is managing Man United they are challenging.

“Because, for me now I’ve got to the point where, when you look at the inconsistency of Man United with the components they have, the team that they have, what they should be doing – we’re talking about Pogba here, World Cup winner, you’ve got Tuanzebe who can’t even get on the pitch after marking two of arguably two of the most exciting and brilliant players in the world.

“He’s using two holding midfielders when if he’s playing Tuanzebe he doesn’t need that! And you’ve got a manager who, for me, is playing off of vibes, he’s managing off of pure vibes.

“And looking at Ole Gunnar Solskjaer, who’s got a Man United team with this Telles – I think Telles looks like someone who could do something – Harry Maguire is starting to get back to what he can do, we know what Harry Maguire can do, with Tuanzebe next to him and Wan-Bissaka, and the goalkeeper is starting to find his form, they should be doing better than that.

“What they did against Arsenal the other day, for me, for Man United, coming off the back of the two results, was embarrassing. Roy Keane was saying the players will get him the sack. It’s not just the players.”

There will surely be many United fans who agree with Wright’s brutal assessment at this point, even if it hurts for them to turn against a club legend.

Solskjaer was one of United’s key figures during his playing days, but it’s fair to say he’s not looking like being in the same league as most of the managers at other top clubs, even inexperienced ones like Arteta at Arsenal.