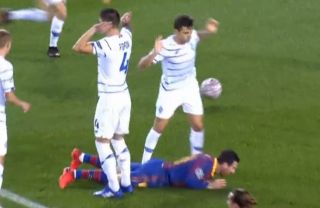 Occasionally you see a penalty decision that’s so blatantly obvious that you need a few seconds to take it in, because it’s hard to believe that a defender would make such a blatant foul.

Barcelona lead Dynamo Kyiv already tonight after Lionel Messi was brought down as he entered the box, and the defender’s innocent act of putting his hands in the air doesn’t fool the ref as he steps across and wipes Messi out.

Messi made no mistake from the spot, and Barca are well on their way already: