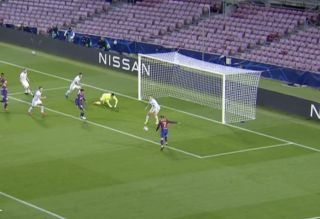 There were plenty of excuses made for Antoine Griezmann last season after a difficult first season at Barcelona, but it did look like this season would be better.

He had a new coach who appeared to place his trust in him and he became the main number 9 at the club when Luis Suarez left, so it was exciting to see if he could get back to his best.

Unfortunately that’s just not been the case, and this miss tonight is another shocker: