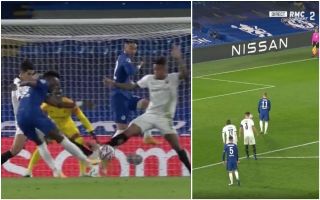 In the 39th minute of tonight’s Champions League tie against Chelsea, Rennes were dealt a killer blow as a lengthy VAR review awarded a second penalty against them and a sending off.

Dalbert was adjudged to have handled the ball in his attempts to block Tammy Abraham’s shot, whilst his arms were raised and in an unnatural position, the ball was deflected onto his arms from his leg.

The referee consulted the pitch-side monitor and VAR to help make his decision, with the official harshly awarding not only a penalty, but a second yellow card and sending off for Dalbert.

Werner stepped up and smashed the ball into the top corner with a lovely spot-kick, bagging his second of the night.

Dalbert went into the book in the opening stages of the game as he brought down Werner before the German scored Chelsea’s first from the spot.

Rennes will feel extremely hard done by, both penalty shouts were hardly stone-wallers and they’ve now been dished out the extra misery of having a player harshly sent off.