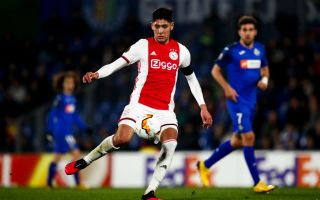 Ajax star Edson Alvarez has revealed he’s a big fan of Manchester City and that a transfer to the Premier League giants would be a dream for him.

The Mexico international has impressed in his time at Ajax, having joined them from Club America in 2019, and it looks like he’s set to go on to even bigger things in the game.

Ajax have a tradition of bringing top young players up through their academy, but in Alvarez it also seems they’ve identified a top talent in the transfer market.

As with many of their other young players, Ajax could make a very healthy profit if and when they sell the 23-year-old, who surely has it in him to step up and play for a club like City in the near future.

He’s made no secret of that being his aim, as he told Voetbal Zone: “I would really like to achieve [an Eredivisie title] one day and then it is a dream of mine to play in the Premier League one day.

“Manchester City is my favourite club, so that would be perfect.”

City fans will now surely be keeping a closer eye on Alvarez to see if the feeling is mutual!