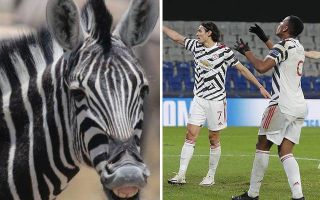 There’s a bizarre (tongue-in-cheek) explanation as to why Manchester United were defeated by Istanbul Basaksehir in the Champions League yesterday evening.

United were defeated by Demba Ba and co in Istanbul to throw a spanner in the works in their efforts to progress from their Champions League group.

With RB Leipzig defeating PSG in Germany, the group not hardly be more open, which could prove to be bad news for United and Ole Gunnar Solskjaer.

The biggest concern for Solskjaer, though, will be the horrific defensive display from his side to gift Istanbul Basaksehir their first ever Champions League win.

Though, it looks as though an explanation may well have been provided…

We have fact-checked this, and it does look to be a widely-held belief that Zebras cannot see Orange, although Kevin Mahon on Animalj12 suggests that it’s just one of several colours they cannot differentiate.

It would explain why Demba Ba was allowed a free-run on goal during the first-half, if the Zebra-printed United players were unable to see the former Chelsea striker.

Although, considering this is not the first instance of horrendous United defending we’ve seen this term, it seems a little harsh to blame it on the kit.