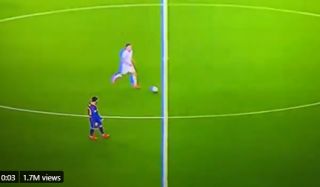 Barcelona superstar Lionel Messi just doesn’t look himself at the moment, and this short video clip sums up his recent slump.

The Argentine has been a joy to watch down the years, establishing himself as one of the greatest to ever step onto a football pitch, but he seems to have lost his way in recent months.

— Out Of Context Football (@nocontextfooty) November 5, 2020

While defending is not usually Messi’s job, a little bit of tracking back wouldn’t go amiss, but he so clearly can’t be bothered.

Does this just show he’s lost his passion for playing for the Catalan giants and that an exit is inevitable?