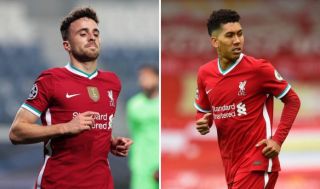 Liverpool head to the Etihad Stadium on Sunday in pole position at the top of the Premier League table.

Unusually, Pep Guardiola’s Man City side are down in 10th place, although the table is slightly misleading as City have a game in hand on the Reds and are only five points behind.

Jurgen Klopp will surely be hoping that his defence can stop the rot against a swashbuckling City side who’ll arguably keep coming at them for the entire 90 minutes.

That said, Guardiola’s side needs to be on their guard too, particularly if Klopp sticks with his most in-form striker.

Ian Wright certainly thinks he should.

“Yeah, I would [start Jota],” he told Premier League productions, cited by the Daily Mirror.

“Bobby Firmino’s form in terms of goalscoring is something Liverpool need to address.

“When they signed Jota, it didn’t make you think ‘What are they getting him for?’ you just went, ‘Ah, I get that. I can see that’.

Jota’s inclusion would sideline fan favourite Firmino, however, the Brazilian’s goal output this season has left a lot to be desired.

Wright clearly has a point, and a brief period on the sidelines might be just the kicker Firmino needs to help him find those shooting boots again.