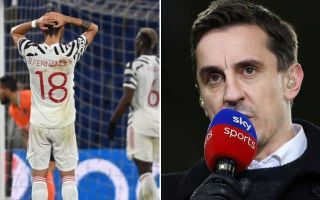 Manchester United legend Gary Neville has given a one-word answer when questioned about his former side’s defeat to Istanbul Basaksehir last night.

United were defeated 2-1 in Turkey after being undone by two pieces of horrendous first-half defending. The first goal in particular was a degree of defensive calamity that you do not expect to see at this level.

Demba Ba could hardly believe his luck after a long-ball sent him clean through on the Man United goal unchallenged. Just as he did on the break at Anfield in 2014, he made no mistake in front of goal.

Gary Neville, who never shies away from sharing his opinions when it comes to matters at United, has now given his take on both the performance and that goal in particular – with just one word that sums it all up.

Just as you thought United were on the turn, it’s all come tumbling down on Ole Gunnar Solskjaer once again. Their clash with Everton at the weekend now looks like an absolute must-win for their manager.