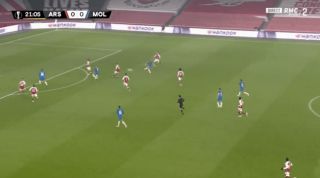 After a stunning performance against Manchester United at Old Trafford at the weekend, Mikel Arteta would surely have expected his Arsenal side to kick on in the Europa League and make light work of Molde.

So many sides have come unstuck in the past through complacency, and that can be the only excuse for the Gunners’ poor start to Thursday night’s game.

The Spaniard is unlikely to be happy with his side’s defending after they allowed Martin Ellingsen to let fly from all of 25 yards to put the visitors in front.

Molde take a shock lead at the Emirates ?

Should Bernd Leno have done better, though? ? pic.twitter.com/4hRXy0S6c2