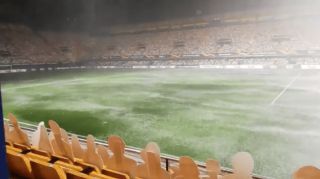 The rain in Spain falls mainly on the plane, or so the saying goes, but you try telling that to the people of Villarreal this evening.

In a storm that can only be adequately described as biblical, the heavens have well and truly opened, and it’s left the Estadio de la Ceramica pitch saturated.

With less than an hour before the Yellow Submarine’s Europa League tie against Maccabi Tel-Aviv kicks off, there has to be serious question marks as to whether it’s even safe for the game to go ahead.