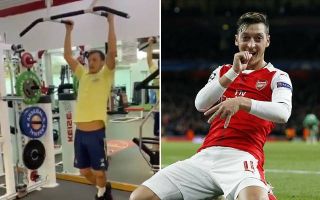 Mesut Ozil is keeping busy during his Arsenal exile. The midfielder posted a video on Twitter of him working out in the gym.

Ozil was not included in Arsenal’s 25-man squad to compete in the Premier League this season, which would have been unthinkable a few years ago, with the German previously being considered one of, if not the, best number tens in the word.

The 32-year-old has turned into a full-time social media influencer since the snub from Arteta, keeping fans up to date on his every thought and action while he has been away from the action.

His latest conquest away from the field appears to be to get big in the gym. Ozil posted the below video of him doing chin-ups, with the caption ‘Stay dedicated’.

Dedication has never been one of Ozil’s best attributes, but perhaps being left out in the cold by Arteta has given the World Cup winner a stark wake-up call.

Or, perhaps more likely, he’s just continuing to play the victim and trying to trick the public into thinking Arsenal and Arteta are the bad guys in this situation…

Arteta clear on his position over keeping Martin Odegaard at Arsenal but player hints his future may be elsewhere May 24 2021, 16:24
Arsenal FC