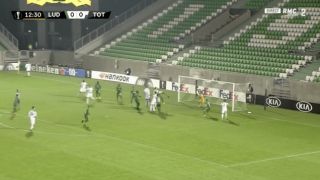 The north Londoners talisman was at it again in Ludogorets, giving the visitors the advantage after 13 minutes of their Europa League tie.

Despite a packed penalty area, as a corner was swung in, Kane rose the highest to power home and give Jose Mourinho’s side a crucial lead.

The Portuguese will surely be looking for a better performance from his troops than on their last European assignment, and Kane has laid the platform for them to do just that.