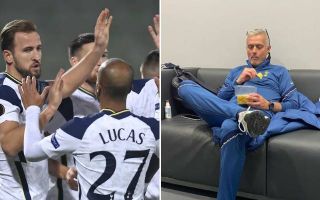 Jose Mourinho’s Instagram page is the new home of football memes – and he shared with us another after yesterday’s Europa League win.

Despite a stuttering start to life in North London, Mourinho looks to be getting the best out of the Tottenham squad at current. Spurs, spearheaded by the deadly combination of Harry Kane and Son Heung-min, sit second in the table behind Premier League champions Liverpool.

MORE: The stat which proves Tottenham’s Harry Kane deserves to be spoken about as one of the world’s best strikers

Their defeat to Royal Antwerp was a notable blip in their Europa League campaign, but Tottenham are very much on track to progress from their group, especially having defeated Ludogorets 3-1 yesterday evening thanks to goals from Kane, Lucas Moura and Giovani Lo Celso.

Despite it being a comfortable win in terms of the score-line, Mourinho does not appear to be completely content. As he tends to do so nowadays, he took to Instagram after the game to share his emotions, posting the below image and caption.

When you win but you don’t play especially well @pfcludogorets1945

We are living in the age of social media, and characters as strong and unique as Jose’s belong on platforms like Instagram. It’s not often we see managers be as prolific posters as The Special One has been this term – but we’re absolutely here for it.