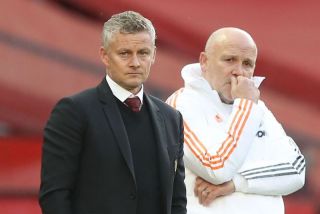 Manchester United manager and assistant manager Ole Gunnar Solskjaer and Mike Phelan have reportedly began to give off an air of resignation as the Reds’ squad begin to lose confidence in the club’s backroom staff.

United sit 15th in the Premier League and face an in-form and impressive Everton side next weekend in a game which has the potential to decide Solskjaer’s Old Trafford fate.

Should United travel to Goodison Park and fail to come away with all three-points, the Reds will slip to as low as 17th place in the league table after seven games.

However, after a recent shock 2-1 defeat to Istanbul Basaksehir earlier this week, the pressure from all sides is beginning to mount with the United walls seemingly closing in on Solskjaer and his backroom coaching staff.

According to a recent report from Daily Mail Solskjaer and his backroom staff including assistant manager Phelan have become more withdrawn than ever at Carrington with the United boss spending more and more time with analysts.

Phelan is believed to have an ‘air of resignation’ around him with the assistant manager becoming increasingly more likely to depart the club.

The Daily Mail’s report also claims that the United squad are beginning to question Solskjaer’s tactics and ability to lead the team forward which often happens when top level athletes feel somebody else is holding back their careers.

The Daily Mail’s report comes at a time when Manchester Evening News revealed that the club’s hierarchy had sounded out Mauricio Pochettino with a view to line him up as Solskjaer’s Old Trafford successor.