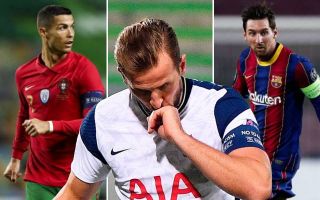 This stat shared by OptaJoe on Twitter proves that Tottenham striker Harry Kane is eclipsing Lionel Messi and Cristiano Ronaldo this campaign.

You would perhaps think it’s laughable to mention Kane in the same conversation as two of the greatest ever to play the game, but when Kane stops performing at a comparable level, we will stop the comparisons in their tracks.

For now, though, he is right up there with the best in the world, with both his consistency in scoring and assisting goals going through the roof under Jose Mourinho this campaign.

Have a look at this stat from OptaJoe. That is not just Messi and Ronaldo levels – that is beyond it.

12 & 10 – Harry Kane has now hit double figures for both goals and assists in all club competitions this season (12 goals, 10 assists), in just his 13th appearance. Ridiculous.

Twenty two direct goal contributions in 13 games is utterly absurd. Goal-scoring flurries can happen and have happened for Kane in the past, but the assists prove that he has gone up a level.

England finally have their own Messi/Ronaldo crossbreed on their hands, at least will do if he continues to perform like this until next summer’s European Championships.

If Kane stays fit, there’s no reason why Spurs can’t win the Premier League this term.