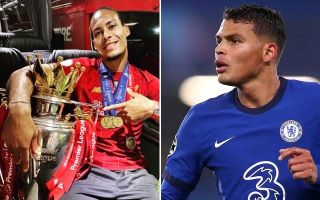 talkSPORT‘s Adrian Durham believes that Thiago Silva can be Chelsea’s Virgil Van Dijk – and the Blues could win the title this season.

Chelsea signed Thiago Silva on a free in the summer after he departed PSG. The Brazilian has been one of the best defenders of his generation, but naturally there were question marks over how much he could contribute at the age of 36.

Silva has wasted no time dismissing his doubters, with his formidable performances being a huge contributor to Chelsea’s recent run of clean sheets.

MORE: Video: Hudson-Odoi on fire in Chelsea training with audacious backheel volley and goal-line save

talkSPORT’s Adrian Durham is impressed with what he has seen. He’s quoted by the publication claiming that Silva can be for Chelsea what Van Dijk is for Liverpool – and Lampard’s men could win the league this term:

“Thiago Silva, in a very different way, is Chelsea’s Van Dijk. But it is because of the leadership skills, they look up to him, don’t they? In terms of winning the title; I got back to that weekend when Chelsea were 3-0 down at West Brom and drew 3-3 and everybody was erupting.”

“Soon as the final whistle went, ‘Oh Chelsea are no good, he can’t get his team right, he’s no good.’”

“Then Man City lose 5-2 at home to Leicester, Aston Villa beat Liverpool 7-2 and all of a sudden, we are realising it is just a bit of a crazy season. That West Brom result, for Chelsea, wasn’t actually that bad! It showed they’ve got a bit of character.”

“It also showed they’ve got goals in them, it also shows they still needed his goalkeeper and centre-half situation sorted out. That happened; Thiago Silva has now settled in, if he stays fit and Mendy stays fit, I think they’ve got a very, very good chance of winning the title.”

The title race has never been so open, so Lampard may well see this as an opportunity to pip Liverpool to the post. If Silva stays fit and continues to perform as he has to date, Chelsea have a fighting chance.