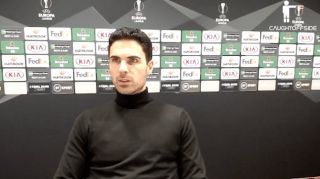 Ahead of their Premier League fixture against Aston Villa, Mikel Arteta has made an impassioned defence of his team’s lack of goals.

Asked by a reporter after the win against Molde in the Europa League why the Gunners were struggling to score, the Spaniard was quick with his response.

Noting that he believed his side had improved in any event, Arteta pointed to Arsenal’s fixture list and matches against high-flying Liverpool, Man City and Leicester as reason enough for their inability to reach double digits in goals scored so far in the English top flight.