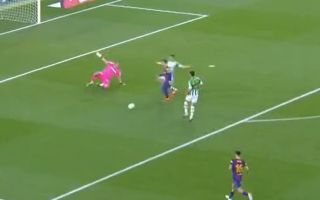 We often look at Lionel Messi and admire his ability to take on multiple players and produce a moment of magic from nothing, but this is even more impressive in some ways.

He’s managed to fool two Real Betis defenders and the keeper with a simply magnificent dummy, and even Antoine Griezmann isn’t going to miss that chance:

MESSI COMES ON AND SAVES BARCA INSANE DUMMY WITH GRIEZMANN TAPPING IT IN WOW ??? pic.twitter.com/sOPsbJ5C5n

It’s further proof that Barcelona are so reliant on Messi even as he gets older, but hopefully this will give Griezmann some confidence and helps to spark a revival for him.