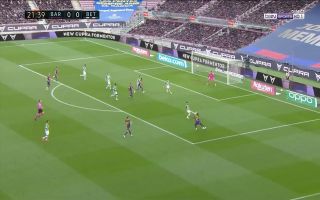 In the 21st minute of the La Liga tie against Real Betis, Ousmane Dembele fired Barcelona into the lead by showcasing a glimpse of his superstar quality.

An opportunity was sparked for the Blaugrana when Frenkie de Jong surged forward and played the ball into Antoine Griezmann.

Griezmann laid it off to his compatriot on the right-wing, with Dembele cutting inside to the box before facing up Alexandre Moreno.

The tricky attacker created some space for himself by fooling Moreno with a fake shot before drilling the ball into the top corner with a left-footed strike.

Ousmane Dembélé cuts inside from the right wing and SMASHES one into the back of the net! ?

A fantastic finish to put Barca in front ?? pic.twitter.com/BZ7UxbdMa5

Dembele has turned in some encouraging performances for Barcelona so far this season after a few of years of real struggle after joining the Catalan outfit for a big-money fee from Dortmund.