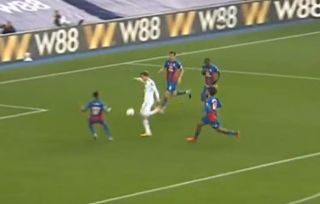 It’s important for players to remain professional and not to become angry when decisions start to go against them, but it must be tough at times.

Leeds were robbed of an equaliser against Crystal Palace earlier on this afternoon thanks to an absurd VAR call, and it got even worse when Palace went straight up the other end to make it 2-0.

Patrick Bamford’s head didn’t drop and he’s been rewarded with his goal this time, and there’s no way for VAR to step in and ruin this one: