According to Spanish publication Sport, Barcelona now face a potentially serious dilemma regarding  Ousmane Dembele’s future after the injury to wonderkid Ansu Fati.

Sport report that Barcelona will continue to listen to transfer offers for Dembele after the Frenchman decided to stay put this summer, despite an agreement with Manchester United being close.

Dembele is now approaching the final 18 months of his contract, with the tricky winger currently unwilling to enter renewal talks with the Catalan outfit.

Barcelona have now been left in a tricky spot, the attacker’s reluctance to sign a new contract at this moment in time means the club have to remain open to a sale in the January window.

However, doing so would leave their attacking ranks seriously short-staffed after Fati suffered an injury in the recent win against Real Betis.

Barcelona state that Fati will have surgery on his left knee’s meniscus on Monday, with Mundo Deportivo adding that this blow could see the talent sidelined for anywhere from six weeks to five months.

It’s added that if Dembele and his entourage continue to hold fire on contract talks, the winger’s head could of course be turned to a potential free transfer exit in the summer of 2022.

Given that Barcelona signed the France international in a deal worth up to £135.5m, as per BBC Sport, there’s simply no way that the club can allow Dembele to walk free.

Dembele’s shown some encouraging signs so far this season after years of struggle since he joined, the ace is now tasked with a more important role as Fati joins Philippe Coutinho on the injury list.

Sport add that Barcelona are aware of interest from several clubs in Dembele, which is at least some promising news following the winger’s tricky spell with the Blaugrana.

Dembele’s brilliant goal against Betis highlighted the kind of X-factor and world-class ability he has. 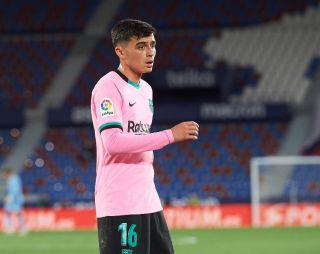