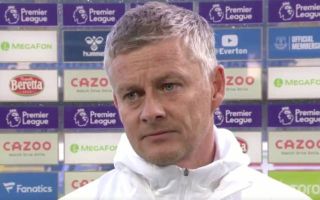 Public ranting about fixture scheduling from Ole Gunnar Solskjaer and Jurgen Klopp has left both Sky and BT Sport bemused, according to a report by the Daily Mail.

As the report mentions, this topic was first brought to the table this weekend after Solskjaer’s furious rant in wake of Manchester United’s 3-1 victory over Everton at Goodison Park.

The Red Devils travelled to Istanbul in the Champions League midweek and were handed the lunchtime kick-off on the Saturday afternoon, something Solskjaer feels aggrieved about.

As also noted by the Daily Mail, his fury was backed up by the manager of United’s harsh rivals, Liverpool. Klopp also aired his frustration at the unfavoured fixture scheduling.

However, the Daily Mail claim that Sky and BT are utterly bemused, with both clubs having sufficient warning and room for input when it comes to marking up the calendar.

It certainly seems like an attempt from Solskjaer to act as though he is being set up to fail at Old Trafford, while in truth none of their shortfalls in recent weeks have been fixture related.

We’re not entirely sure what’s in it for Klopp. Perhaps the club have agreed to dodgy scheduling over his head, or maybe he’s just moaning for the sake of moaning.