Some Arsenal fans will be delighted to see that highly-rated defender William Saliba played a key role in the build-up to a goal for the north London outfit’s Under-23s side against Gillingham.

In the 6th minute of the tie, Saliba picked up the ball deep in Arsenal’s half after a pass across from Calum Chambers – who made his return from a serious injury with 45 minutes of action tonight.

Saliba was gifted the freedom to carry the ball all the way into the final third, with the 19-year-old not even having to pull off a sprint to do so.

Then come the sign of what the ace could offer the first-team after their defensive destruction against Aston Villa, as Saliba played a lovely through ball into the Gunners’ left-winger.

A cross was fired in, which Arsenal’s Zech Medley failed to control for his loan club, leaving Catalan Cirjan free to snatch an opener as he poked the ball into the back of the net.

DEFENCE SPLITTING PASS BY SALIBA IN THE BUILD UP TO A GOAL pic.twitter.com/xn4kgmoCUy

Cirjan was the match-winner for the Gunners tonight with a wonderful Panenka penalty to win the shoutout for the side.

Arsenal signed Saliba last summer for a fee of £27m as per BBC Sport and the French starlet returned on loan to his boyhood club for the campaign as part of the deal.

Saliba is yet to make his competitive debut for the Gunners though, with the ace even being left on the bench for the Carabao Cup tie against Leicester.

Mikel Arteta admitted before the recent Europa League clash against Dundalk that he was ‘fed up’ with the defender’s situation, with the Spaniard clear that the club tried to arrange a loan move for the ace. 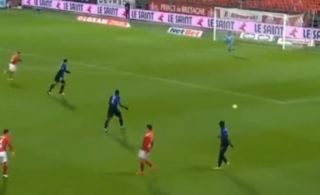