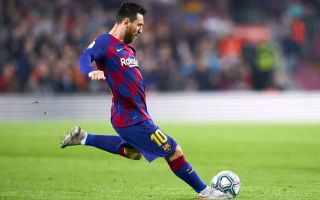 Messi has an unparalleled skillset in his Arsenal, with free-kicks being on that list.

The Argentine is the best dead-ball taker on the planet, that’s for sure, and this stat shared by ESPN on Twitter is testament to that fact.

This Messi stat is insane ? pic.twitter.com/RZpCyf5tXl

MORE: Lionel Messi asked Koeman to only use him in second-half for Barcelona vs Betis with ankle trouble a concern for Argentina

It shows that over the last ten seasons, Messi alone has scored more free-kicks than Juventus, Real Madrid and Roma. Not a single team has scored more than the Barcelona wizard.

That is quite incredible, even if he has been Barca’s preferred free-kick taker throughout the majority of that period. Barcelona’s social media team were evidently intent on sharing the stat far and wide.

Messi has endured an uncharacteristically slow start to the season, with the disrespect, as it often does, following suit. Stats like this show just how lucky we are to have witnessed him play.