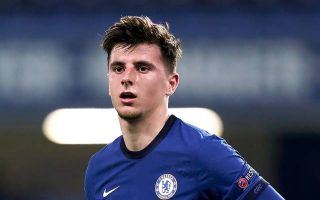 Chelsea midfielder Mason Mount has revealed what he believes is his best position – and it’s not where he’s currently being fielded.

Though Frank Lampard acquired Hakim Ziyech, Kai Havertz and Timo Werner over the summer, he still appears intent to find a spot for Mount in his starting eleven.

The Englishman was Chelsea’s most-used player last term, during his debut campaign with his boyhood Blues, and his significance in the squad has not decreased in wake of high-profile arrivals.

Whether it be wide-right, wide-left or in the hole behind the striker, Lampard has ensured there’s room for Mount in his team – but the 21-year-old has now revealed his belief that none of the aforementioned are his best or favoured roles.

MORE: ‘We can play together’ – Mason Mount dismisses suggestions of rivalry with England teammate

He’s quoted by the Guardian saying:

“I’ve played midfield my whole life. I’ve varied between playing a bit more forward in a No 10 position but I always kind of see myself as a No 8. I’ve definitely got longer passing in my locker and you can bring that out more when you’re playing in that No 8 position.”

“I do like that [central] role. It allows me to build up play with the ball and also get forward and join the attack. With the attack threats we’ve got in this team, for me to be deeper suits me and the way I play.”

Mount is clearly keen for a deeper role in Chelsea’s side, one where he can dictate the play. Perhaps he has one eye on Jorginho’s distributing role, or the box-to-box responsibilities of N’Golo Kante and Mateo Kovacic.

Either way, he doesn’t appear to be wanting to play where he is at current long-term.